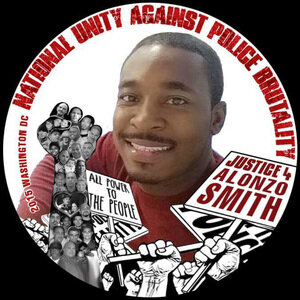 Alonzo’s mother, Beverly Smith, has been fighting for change since her son’s life was taken in 2015. Hear his story through her voice.

In 2015, 27-year-old Alonzo Smith, an unarmed black man, died in handcuffs while in the custody of DC Special Police Officers (“SPOs”) working at an apartment complex in Southeast DC. His death was later ruled a homicide. That same year, 74-year-old James McBride was killed by SPOs working at Medstar Washington Hospital Center. Recently, the Washington Post ran a story titled “CVS Terminates Contract of Private Security Company after Guard is Seen Pressing on Neck of Shoplifting Suspect.” The man could be heard saying “I can’t breathe.” The incident occurred in Northwest DC and the guard is an SPO.

Special Police Officers are private, armed security officers that patrol public housing and other areas in the District. The Mayor appoints and contracts out this sector of public safety to private security companies who then employ and assign SPOs to specific locations. SPOs and the companies that employ them have been the subject of numerous complaints of brutality, negligence, harassment and sexual harassment.

There have been previous efforts to improve special policing by Mayor Muriel Bowser, Councilmember Kenyan McDuffie, and Councilmember Charles Allen. Councilmember David Grosso has urged the District to disarm all police.

SPOs receive inadequate training and pose a risk to the public. DC SPOs receive a mere 40 hours, roughly one week, of training before being armed. In contrast, Metropolitan Police Department (“MPD”) officers receive 28 weeks of training from qualified and experienced DC instructors before receiving a gun. Disarming SPOs and increasing the quality of their training will make DC residents and citizens safer. First, DC has more police officers per capita than any other American city. Second, the DC Housing Authority already has a 24-hour police force that works to protect public housing. Thus, in a jurisdiction smaller than 70 square miles, armed SPOs are unnecessary given the presence of numerous sworn police officers on patrol.

There is no public mechanism to oversee the actions of SPOs. MPD tracks and publishes use of force incidents by its officers to the public yearly. However, MPD is not required to keep records of complaints against SPOs. Currently, DC residents cannot file online complaints against SPOs. And others have filed written or oral complaints only to later discover that MPD and the relevant security agencies keep no records of SPO complaints. The Special Police Officer Oversight Amendment Act of 2019, was introduced by Councilmember Charles Allen to create oversight for SPOs, but is still under Council review and has not yet been passed. (Note: Virginia Spatz and Beverly Smith collect complaints at spodatadc.org).

SPOs often pursue individuals beyond their statutorily defined boundaries. In 2014, the Office of the Inspector General raised the alarm, noting that Special Police Officers “engage[] in law enforcement activity outside of their jurisdiction.” The Inspector General emphasized that these actions “violate District regulations, may place SPOs, the District, and the public at risk, and could result in litigation or monetary losses.” Therefore, SPOs should be limited to the property they are deputized to protect and prohibited from fresh pursuit beyond those boundaries.