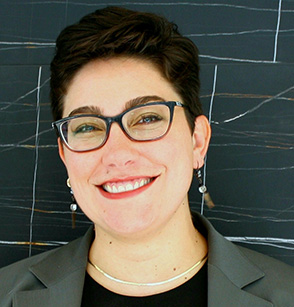 Director of Government and External Affairs

Emily Tatro Cassometus (she/her) is the Director of Government and External Affairs at DC Justice Lab. She leads the organization’s relationships with elected officials and policymakers, develops and executes advocacy strategies, and builds teams of partners to fight for policy solutions. She identifies levers of power and tailors strategies to move those levers to achieve our goals. She is a skilled relationship builder and is adept at seeing, manipulating, and changing systems.

During her first year at DCJL, Emily succeeded in getting eight new laws passed, including those making it easier to seal criminal records, making oversight of jails more independent and accountable, limiting police powers, and revising the criminal code.

Emily’s approach is grounded in principles of abolition, harm reduction, disability justice, and intersectional feminism. She is committed to building communities in which we prevent and repair harm without defaulting to incarceration. She is an expert in non-traditional legal advocacy, campaign planning for systems change, and facilitating teams with different interests toward achieving a shared goal.

Emily has lived in the District of Columbia for more than a decade. During that time, she has actively studied decarceration tactics and helped clients navigate our current systems of incarceration and reentry. Prior to DC Justice Lab, she served as Deputy Director of the Council for Court Excellence, where she led organizational strategy development and managed a team of policy counsels to address the most pressing issues in D.C.’s legal system. She also facilitated the District Task Force on Jails & Justice, which issued 80 recommendations to invest in violence prevention, intervention, and reentry; cut D.C.’s incarcerated population in half by 2030; regain local control of the criminal legal system to end the over-incarceration of Black people; and bring D.C. residents home to a safe environment. Before that, Emily was the Criminal and Disability Rights Fellow for the D.C. Jail and Prison Advocacy Project at Disability Rights D.C., a program of University Legal Services. She began her career at Teach for America, where she developed conflict resolution programming for her Pre-K students.

Emily earned a J.D. from Georgetown University Law Center and a B.A. in Sociology from Temple University. She is honored to serve on the board of Collective Action for Safe Spaces, a grassroots organization working to eliminate gendered harassment and violence in D.C.